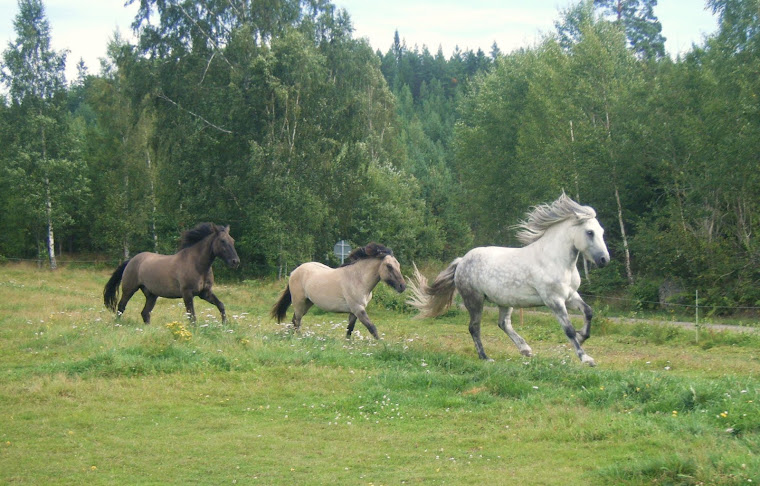 Top of the world Malexander style!

Looking for deserted old crofts in the forest is a hobby of mine. It is fascinating to find traces of the people who toiled here over the centuries. Once there were many, many little crofts scattered around the marginal agricultural lands that has now been put back into forest. A sign of a croft can be to discover an old apple tree in amongst the conifers – or the remnants of an old wooden fence or stone wall. The croft buildings are often long gone – taken down to build something else in another place or simply just rotted away. 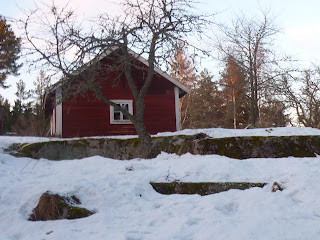 The surest sign of an old dwelling is – the rubbish tip! There is not a single old croft without a site filled with old buckets, broken china, some tin cans and maybe even the old iron stove that was chucked out when electricity came in the 60-s...And there is nothing wrong with that – garbage collection was an unknown luxury in the Swedish countryside until quite recently and it must have seemed logical to gather everything non-organic in one place – a bit tucked away. Out of sight out of mind! And rather non obtrusive compared with today’s monumental landfills..
Hence it is no surprise that the very first sign of the croft Övrabo is the rubbish tip just below a cliff. After the steep climb up to Övrabogölen we are relieved to realise that we must be close. The walk through the forest has been a steady incline all the way up from Malexander. We couldn´t find the trail under the snow so all we could do was to go – up! Övrabo is the highest dwelling in the Malexander area and has no road leading to it what so ever, just an old trail. In spite of the elevation there is no view from the croft – the surrounding pine forest is far too high to allow that. But never mind - it´s the feeling of what life must have been like for the crofters up here that is the real attraction for me. 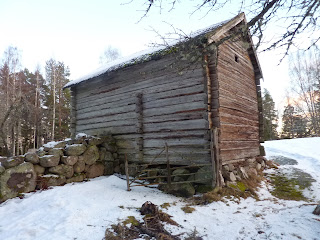 The entire croft; a cottage, a cowshed and a corn store, are set on an enormous slab of rock in the middle of the forest. The small patches of fertile land are surrounded by high stone walls reminding me of a Scottish croft. The walls are a testimony of the momentous labour that went into clearing land for growing crops and winter fodder in this area. The walls probably came in handy also to protect the crops from frost in spring and autumn. There was almost certainly no horse on this smallholding and maybe not even a cow – there is so little land to grow feed on. And imagine the way the kiddies had to walk to school from here – straight down the hillside in to the church village of Malexander. It must have taken them several hours to walk. Or maybe the children were faster in the old days – or not so inclined to keep on stopping? 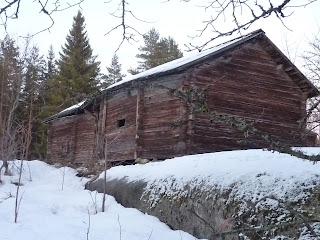 Amazingly we find the old well still intact. There seem to be a well trodden path down to the forest pond Övrabogölen some hundreds of meters away. Maybe water for the animals was fetched from there to save on the well water in dry summers? My brain is racing with images of a life long gone – this place certainly evokes ones imagination and lust to find out more. Maybe there is someone out there – reading this – who knows what life here was like?

On Sunday we packed our lunch sandwiches, a flask of coffee and the camera for a walk on the ice of Lake Svarten. The husband had spent the previous night at a Whisky fair in Linköping so he needed some air and when the sun is shining nothing beats walking on the ice!  There is something so fascinating about the feeling that the ice capped lake might be a field instead of water, it turns all the familiar places and views upside down and makes you look at the surroundings from a whole new perspective.

All this philosophising was totally down to me of course. The husband had whisky and the upcoming VAT-report filling his head and the dogs – well, they don’t care about new perspectives – they just like running fast on the ice. No one had been out on Svarten since the last snowfall and we felt like pioneers braking new territory. There are no dwellings around this lake, no telephone masts and you don’t have to ask for silence – it reins as long as you keep the noice down yourself!

About 20 meters out from the shore line there was something black in the snow catching my eye. “Odd to find deer dropping but no deer tracks” I thought and kicked around a bit with my foot. Out of the snow pops – a frozen toad! It was only partly covered by snow so must have ended up there in the last few days. 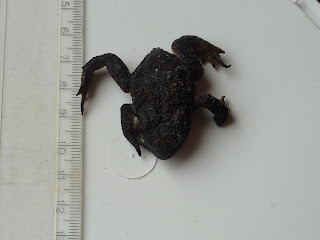 There are varying theories about this:


Vain ? Oh no – not me…
Today, work took me on a trip – to Stockholm. Or to be more precise to ICA HQ (major Swedish food retailer) in Solna where I teach about meat at the Ica Academy for shopkeepers and staff. I just love lecturing!
Since this was my first work trip from Malexander I left home very early to make sure i would get to Boxholm station before the commuter train did. This led to me not having time to don my eye makeup before leaving the house. Instead I tried my luck applying mascara without access to any mirror standing on the commuter platform. It felt ok though – no major mishaps or clumps of black, i hoped.
On arrival in Linköping, the capitol of our region, the Intercity train to Stockholm turned out to be more than an hour late. I waited, rather disgruntled, in the company of a TV-journalist and his camera man in the station building. The journalist started asking me questions about commuting to work and whether i would like to comment, for the national news,  on a brand new scientific report that states that commuting  wears your body down. Especially the stress that is due to trains not arriving on time. I got chatting and tried not to look straight in to the camera too much when -  in the middle of a clever remark about something – it struck me – I never did get to check how successful I really was with the mascara brush that morning...
-          What if I had black clumps and smears all around my eyes – not surprising he has chosen me as an example of a middle aged women broken down by  commuter stress – oh my....
...was what I was thinking in panic whilst trying to continue the interview – I still retain my simultaneous capacity if not my (once) youthful looks! And did I get in to the news? No idea – I´m still on the train trying to get home in time for dinner!!


It is warm in Malexander..
...and I am not mainly referring to the fact that it has suddenly turned mild, + 5 today, with uncontrollable snow melting as a result! No, I am more referring to warmth of the human kind. I have lived most of my life in what can best be described as the boondocks. And whatever fables there might be about romantic life in the country – in these areas it is generally not common practice to welcome newcomers with open arms.
Unless you are a newcomer in Malexander – where this is actually the case! Already in the first week of arriving the Village committee treasurer turned up with a bag full of Malexander goodies donated by local companies. There was also a pot plant, a guide book over local footpaths and a hand painted basket. I was so touched by all of this, and it has continued ever since. People have rang up and popped in just to say “Welcome”, we are invited to post information about ourselves on the local webpage and newsletter and are offered a free meal at the local restaurant t just to say thanks for pulling a neighbour out of the ditch! One of the local hunters knock on the door on a particularly cold night just to make sure that we are keeping warm – and we certainly are – thanks to all the lovely people here.
This might sound an awful lot like bragging – and it certainly is! To brag about how a whole village helps to make newcomers feel welcome is not just allowed – it blooming well is arbitrary!
But make sure to wear studs under your shoes if you feel like paying us a visit – it is unbelievably slippery just now!

Web publishing is difficult... I have not had any comments added to my blog yet. As a good swede I have just concluded that nobody cares enough about my scribbles to want to comment any of it - obviously...
But, now it appears that I have had my blogg commenting blocked to anyone exept other google account owners. Whatever that means...Thanks to one of my readers I have now fixed this - I think - and anyone should be able to add their thoughts. Scary - since I know leave myself open to REAL dissapointment if there  still is no commentry coming in!
For my english readers; you can find the commentry box by scrolling all the way down to the bottom of the page - I have yet to figure out how to place it under each new entry - sorry!!!

A nice little story to add is this:
Yesterday when I stepped outside I saw a large bird of prey come swooping down from Lake Svarten. It flew right down over our yard, turned it´s head to look straight at me and said: Quipp?

I had no fitting answer to this obvious question so the bird gave a couple of strong wingstrokes and sailed on towards Sommarhagen. I cannot say if it was a large Buzzard or a young Eagle, but it was mindblowing to be spoken to by a wild bird  in either case! 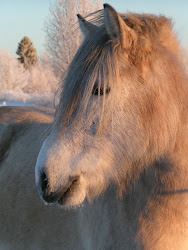